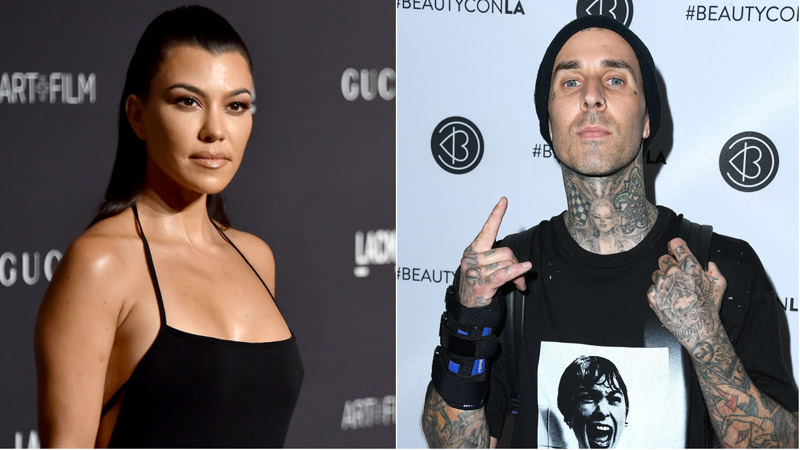 Kourtney Kardashian has a lot to smile about these days.

On Monday, the 42-year-old Keeping Up with the Kardashians star celebrated Memorial Day with boyfriend Travis Barker and two of her three kids, daughter Penelope Scotland, 8½, and son Reign Aston, 6, by her side.

Kardashian also shares son Mason Dash, 11, all of whom she co-parents with ex Scott Disick.

Posting a carousel of photos and videos on her Instagram, Kardashian showed off exciting moments between the group, which included some fun pool time and a giant inflatable water slide.

The Poosh founder also posted a bikini selfie, as well as videos of herself and Barker, 45, rolling around on a grassy field. “happy weekend,” Kardashian captioned the post.

On his respective Instagram account, Barker shared similar images from the holiday, showing himself sliding down the water slide with Kardashian’s youngest son. The musician captioned his post with a simple sunglass-wearing emoji.

In January, a source confirmed Barker and Kardashian’s relationship to PEOPLE, and the couple made things Instagram official over Valentine’s Day weekend.

Since then, their romance has continued to heat up. From Barker tattooing Kardashian’s first name on his chest to the pair packing on the PDA during a romantic getaway in Utah, the two haven’t shied away from showering one another with affection.

Last month, after the pair took a trip to Disneyland with family, the Blink-182 drummer left a sweet note for his love. Posting a picture of himself holding his girlfriend’s hand while riding the King Arthur Carousel, Barker wrote in the caption, “Happiest Place On Earth 🌍.”

“happiest ❤️,” Kardashian responded in the comments section at the time, prompting the musician to reply, “with the love of my life.”
A source previously told PEOPLE that Barker “often spoils” Kardashian.

“Kourtney still seems very happy with Travis. He is very into her. He constantly gives her compliments and attention. You can tell he is thrilled to be dating her,” the source said. “Kourtney is soaking it all up and enjoying life.”

Jessica Seewald Files For Divorce After Two Years of Marriage

Jennifer Aniston reacts to her first Emmy nomination in 11 years