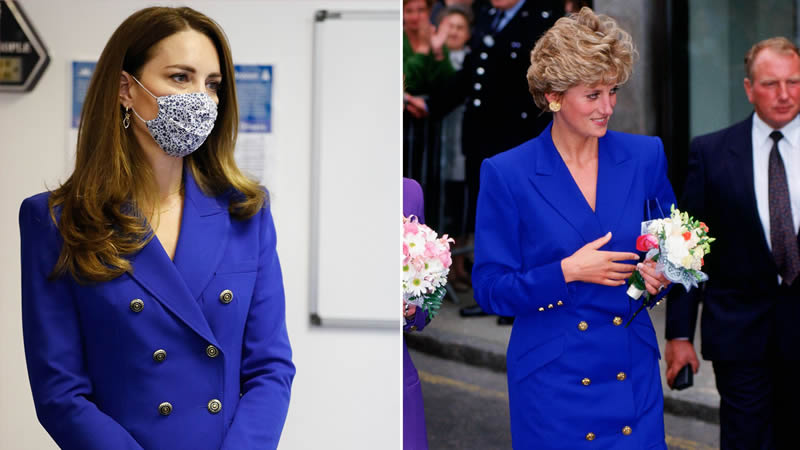 The Duchess of Cambridge, 39, kicked off her tour of Scotland with Prince William on Monday, dressed in an all-blue outfit practically identical to one of Princess Diana’s ’90s looks.

Kate Middleton continues to keep the Princess of Wales’ memory alive through fashion and accessories. More often than not, the Duchess of Cambridge makes a subtle nod to Diana by wearing her jewelry, but most recently, Kate recreated an entire look from 1992.

Kate looked as stylish and chic as ever, sporting a blue Zara blazer and a stunning blue pleated skirt by Hope, with nude heels and a nude bag. She also carried Métier’s mini Roma clutch.

The look was very similar to a look worn by her late mother-in-law Princess Diana in 1992, down to the buttons adorning the blazer and the pleats in their skirts.

Two of her post-baby looks paid homage to Princess Diana, and she regularly selects outfits, tiaras and jewelry that honor her mother-in-law.

Of course, there’s also her famed sapphire engagement ring, which once belonged to Diana. The iconic sparkler, designed by Garrard, features a 12-carat center stone surrounded by a halo of 14 diamonds.

The Duke and Duchess of Cambridge — who recently celebrated their 10th wedding anniversary — are in the midst of a seven-day trip to Scotland, which will include a visit to the University of St. Andrews, where they met and fell in love.

Brooke Shields Calls Gruesome Leg Injury ‘the biggest blessing’: ‘I realized what a fighter I am’