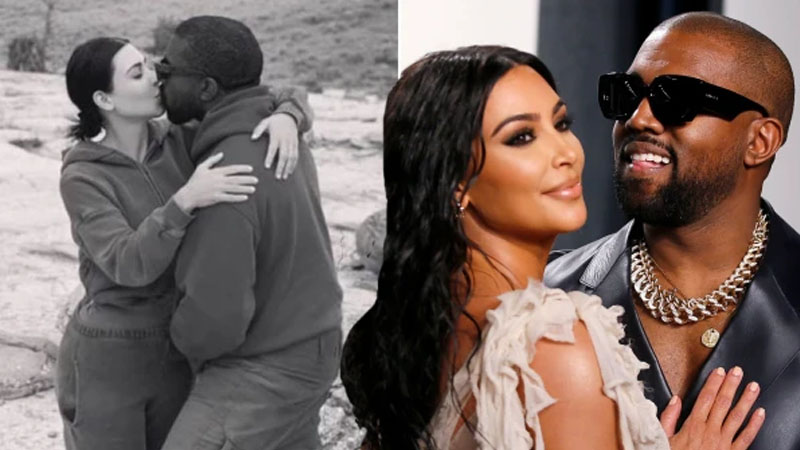 Kanye West has been vocal about his desire to reunite with his ex-wife Kim Kardashian (Picture: Reuters / Instagram @kanyewest)

Kanye West is continuing his quest to restore Kim Kardashian’s affections eight months after the reality star asked for a divorce. On November 26, the rapper shared an old photo that Kardashian had originally posted to her Instagram Stories in 2019.

The photo (which you can see here) shows West and Kardashian kissing while dressed in matching sweatsuits. West overlaid a TMZ headline that read, “Kanye West Says God Will Bring Kim and Him Back Together, Inspire Millions” over the photo. West tagged both the publication and his ex-wife.

The article West referred to went into detail about the speech he gave while dropping off meals at the Los Angeles Mission on November 24. “The narrative God wants is to see that we can be redeemed in all these relationships,” West said, per People.

While denouncing the narrative pushed by Keeping Up With the Kardashians networks Hulu and E!, West added, “If the enemy can separate Kimye, there’s going to be millions of families that feel like that separation is okay… but when God brings Kimye together, there’s going to be millions of families that are going to be influenced to see that they can overcome the work of the separation, of trauma the devil has used to capitalize to keep people in misery while people step over homeless people to go to the Gucci store.”

According to People, West also revealed that he has moved to a home near his family because he “needs to be back home.” Kanye West and Kim Kardashian married in 2014 and have four children: North, who is eight years old, Saint, who is five years old, Chicago, who is three years old, and Psalm, who is two years old.

Kardashian filed for divorce in February 2021, according to reports. Eight months later, West first announced his intention to reconcile with Kardashian in early November, following rumors that she was dating Saturday Night Live comedian Pete Davidson.

“SNL making my wife say ‘I divorced him’ on TV because they just wanted to get that bar off,” West said onthe Drink Champs podcast, per People. “And I ain’t never even seen the papers, we’re not even divorced.” He later added, “That ain’t no joke to me. My kids want their parents to stay together. I want…us to be together.”

Kardashian and Davidson have since confirmed their relationship and appear to be to become more serious, while West is said to have unfollowed his ex-wife on Instagram.

“[Pete and Kim] are really happy and seeing where it goes,” a source recently told E! Online. “Pete has told her he doesn’t want to see anyone else.” Kardashian reportedly feels the same, with the source continuing, “She is telling some people they aren’t super serious but she isn’t seeing anyone else….

She’s trying to not make a big deal about it but is super into him…. Kim is smitten over him and it’s very exciting to her.” In case you needed the point driven home, the source also told E!, “He makes her laugh the entire time they are together and she is completely enthralled by him.”