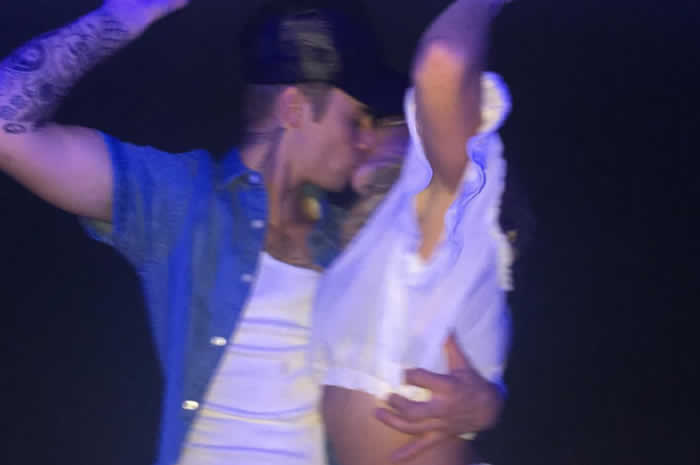 Justin Bieber is definitely not “sorry” for this one! The 21-year-old pop star posted a series of snaps with his rumored girlfriend, Hailey Baldwin, to Instagram on Sunday. In one of the photos, Bieber has a tight grip on the 19-year-old model as they embrace in a steamy lip-lock, seemingly confirming that their relationship is very much on.

The PDA-filled photo was followed up with another shot of the two dressed in formal wear, cuddling up close on a couch.

A source tells ET that the two have been spending a lot of time together. “At dinner the other night, Hailey was gently caressing his shoulder while he fed her bread,” the eyewitness said.

“They’re very sensual.”  Baldwin is currently on a Caribbean vacation with the “Where Are U Now” singer and his family. On New Year’s Eve, she shared her own black-and-white photo of the two getting cozy. Beliebers noted that the intimate pic looked exactly like one he snapped with his on-again, off-again girlfriend, Selena Gomez, back in October 2014.

Hmm, maybe he’s trying to make the former Disney star jealous? After all, Bieber and Gomez dated on and off from 2011 to 2014 and sparked rumors of a reunion in November when Bieber adorably serenaded the “Same Old Love” singer at the Montage Beverly Hills Hotel in Los Angeles.

Though Jelena fans were hoping for an official confirmation that they were back together, it never happened, and by the looks of it, Bieber has moved on with someone new.

7 Best Jeans for Men This Season