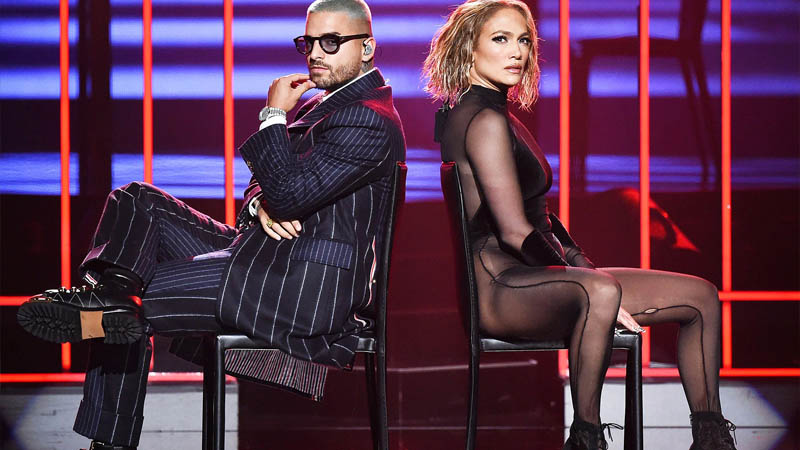 Jennifer Lopez and Maluma had one fiery performance at the 2020 American Music Awards. However, many people noticed it looked familiar.

It’s safe to say for tonight’s ceremony, celebrities aren’t missing a beat. While the award show has appeared slightly different due to the ongoing coronavirus pandemic, that doesn’t mean it hasn’t been full of memorable moments.

For one, Taraji P. Henson has nailed her hosting duties at the star-studded affair. Not to mention, Justin Bieber, who performed for the first time in four years, gave one moving performance with Shawn Mendes.

However, they weren’t the only ones to get people buzzing. Jennifer Lopez and Maluma hit the stage with a fiery performance to their chart-topping tunes “Pa’ Ti” and “Lonely” from their upcoming movie Marry Me.

J.Lo donned a black barely-there catsuit by LaQuan Smith that had peek-a-boo material and a velvet bodice. She also kept her short hairdo and rocked a “wet” hairstyle, which she debuted on the red carpet.

But from her ‘do to her risqué ensemble, many couldn’t help but compare Jennifer’s look and performance to Beyoncé’s from the 2014 Grammy Awards performance to “Drunk in Love.”

Moreover, Jennifer danced around a chair in black, blue and red lighting, which was similar to Bey’s at the time.

“Does anyone notice that J.Lo is ripping off Beyonce on her performance at the amas,” one Twitter user commented. Someone else shared, “Now why did J Lo steal Beyoncé’s whole thing like that lmao.”

Another Twitter user added, “So I’m not the only one who was like “But wait….” Love J Lo and she totally gave us #Beyonce at the 2014 Grammys.”

Another posted, “J.Lo copied Beyoncé’s 2013 AMAs performance and no one can tell me otherwise. She did the hairstyle, the poses, the outfit, the attitude… Hell she even did that pre-recorded live shit too. I’m sorry but Queen B has to sue.”

At this time, Jennifer has yet to publicly comment on people claiming she copied Beyoncé.

For Maluma’s part, he looked suave and dapper with his black-and-white ensemble. He donned a pinstriped suit by Thom Browne to kick off the duet “Pa’ Ti” with J.Lo, but shortly after, he threw off his blazer to reveal his unbuttoned blouse.

The pair’s performance wasn’t the only thing people buzzed over. On the red carpet, the Hustlers actress dropped jaws and turned heads with her beauty look. She skipped her signature long hairstyle and showed up with an incredible new hairstyle: a lob.

She also shined bright with her sparkly Balmain outfit, which was full of silver rhinestones. Maluma also sizzled on the red carpet with a navy blue suit and a white tee.