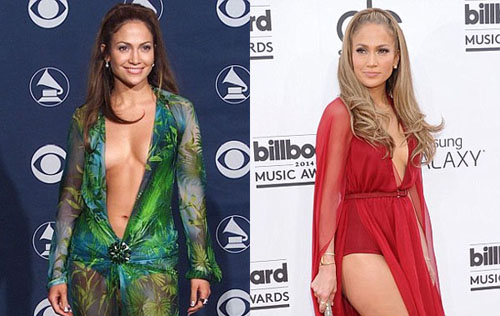 When Jennifer Lopez wants to make a statement, she does so with her clothing. The 44-year-old singer showed up to the Billboard Awards Sunday looking like a glamorous superhero in a red – and very plunging – sheer gown by Donna Karan.

It didn’t appear to be an accident that the dress was reminiscent of the green Versace number she set tongues wagging with at the 2000 Grammy Awards. Since she was set to receive the Icon Award at Sunday’s ceremony, the Hypnotico singer made sure to look the part. The entertainer, who recently switched to a vegan diet, flaunted her long legs and tiny waist in a belted bodysuit that she rocked underneath the chiffon robe.

Her hair – which was pulled off her face and into a semi up-do with added extensions – was virtually identical to the one she wore with the Versace dress. Since wearing the jungle-print Versace gown that plunged past her belly button, the Selena actress has consistently made best dress lists. Whereas her date at the Grammys was then boyfriend Sean Combs, she arrived Sunday with dancer and live-in love Caspar Smart, who at one point helped her splay out her gown for the cameras.

Jennifer Lopez appears to be thinking quite a bit about her stylish and shocking entrance at the Grammys 14 years ago: In her tongue-in-cheek new video for I Luh Ya Papi, she pays homage to the dress in the form of a very similar – and nearly as revealing – jungle print silk top and pants. Following her exciting red carpet arrival, Jennifer Lopez slipped backstage and made a complete costume change for a performance with Pittbull.

The Jenny From The Block singer donned a gold fringed onesie as she duetted with the rapper. Then later in the evening Jennifer Lopez was awarded the Icon gong by Ricky Martin and Iggy Azalea honouring her for her work as an actress, a singer, a dancer, and a designer. She went on to perform her new single First Love ins a sequinned bodysuit before tearfully accepting the award.

The star wore a  one-sleeved sequin body stocking that hugged her famous curves and when performing, Jennifer Lopez made sure to give the audience several views of her famous backside. She also changed her hairstyle, freeing her locks from her face and sweeping them over to the side.

Stress in the Workplace: A Costly Epidemic