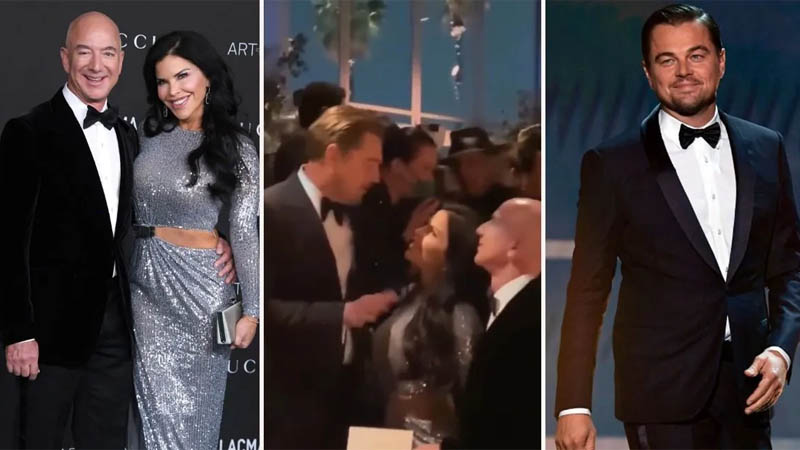 In the video, Lauren Sánchez has her arm around Leonardo DiCaprio, and the two seem to be hitting it off while Jeff Bezos doesn’t seem unaware!

Amazon founder Jeff Bezos Monday jokingly reacted to a video featuring his girlfriend Lauren Sánchez and actor Leonardo DiCaprio, that is going viral on the internet.

In the now-viral video, while Leonardo is seen talking to the couple at the LACMA Art+Film Gala in Los Angeles that was held on Saturday, Jeff Bezos’ girlfriend Lauren Sánchez, on the other hand, is apparently seen swooning over the ‘Titanic’ star as he spoke.

In the video, Sánchez briefly has her arm wrapped around Leonardo DiCaprio, and the two seem to be hitting it off while Jeff Bezos doesn’t seem unaware!

Now, after the video has become the talk of the own taking and netizens are coming up with hilarious memes, Jeff Bezos too jokingly responded to the clip with a message for the actor.

Bezos put out a shirtless photo of himself holding a ‘Danger! Steep Cliff Fatal Drop’ signboard and wrote alongside it on Twitter, “Leo, come over here, I want to show you something… @LeoDiCaprio.”

Hilarious. The man sure has a great sense of humor! Isn’t it?

Take a look at the viral video and Jeff Bezos’ reaction here:

For the unversed, Jeff Bezos and Lauren Sánchez, a TV host and helicopter pilot, have been dating since January 2019. The two were outed as a couple amid the announcement that Bezos and his wife, MacKenzie Scott, were divorcing.