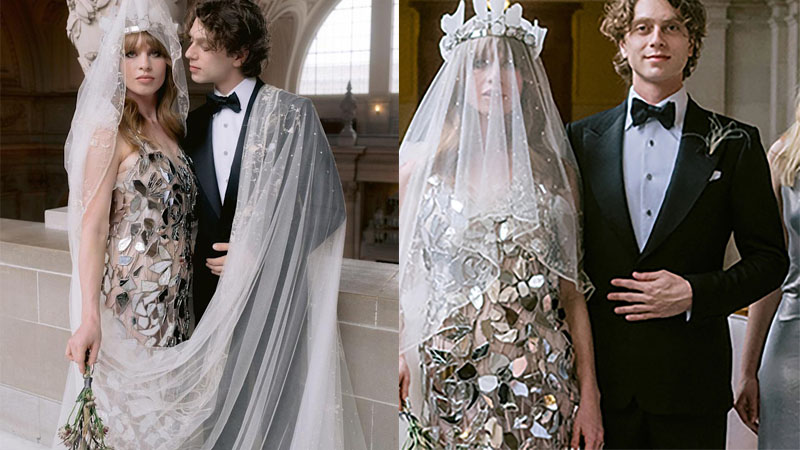 Over the weekend, the 26-year-old artist and model married photographer Tobias Alexander Engel in a star-studded ceremony at San Francisco’s City Hall.

According to Vogue, the extravagant celebration was attended by actress Anya Taylor-Joy, the bride’s maid of honor, as well as House Speaker Nancy Pelosi, who officiated the wedding.

“It’s just like everything I could have dreamed of and more,” Getty — the daughter of musician John Gilbert Getty, who died last November — told the outlet. “So it’s wild when something so magical comes true because you’ve thought about it but didn’t actually think it would. Miracles happen.”

Taylor-Joy, 25, paid tribute to her friend on social media, calling her the “most beautiful bride.”

“My baby girl got married yesterday. Being by your side all these years and your maid of honor has been nothing short of a privilege and your existence, nothing short of a miracle,” she wrote on Monday alongside a series of snaps from the pre-wedding festivities.

“I am so PROUD of the woman you’ve become. If you’re ever in any doubt- I have loved you and will love you, forever,” Taylor-Joy added. “CONGRATULATIONS LIL SPICE MONKEY! You truly were the most beautiful bride 💋♥️👯‍♀️.”

“I love you so much Ans. Always and forever,” Getty replied in an affectionate comment. “You were the best maid of honor I could have ever imagined and we had SO much fun. Unforgettable and an incredible weekend full of love and magic.”

According to Vogue, the festivities began Thursday night with a 1960s-inspired bash in San Francisco’s Palace of Fine Arts, which was reimagined as a nightclub for the occasion.

According to the outlet, all guests were obliged to show their vaccination cards at the entry before enjoying a night of entertainment that included a DJ set by Mark Ronson and a performance by Earth Wind & Fire. To top it all off, the bride wore three different vintage looks during the evening.

According to Vogue, guests enjoyed a pre-wedding picnic on Friday afternoon, complete with IV drips for anyone in need, and the wedding day celebrations began with a pajama party.

The bride walked down the aisle in a custom John Galliano gown made of glass shards, and all of her bridesmaids wore gowns by the designer as well.

“Ivy looked incredible in all those mirror shards that tinkled as she walked up the step,” Hamish Bowles, guest and contributing editor for Vogue, told the outlet.

According to the source, the couple included their rescue dog Blue in the ceremony by entrusting the pup with keeping their rings safe.

According to Vogue, after the couple said “I do,” Queue Myra launched into a rendition of her hit song “Miracles Happen,” which is featured in The Princess Diaries. Following that, the entire group returned to the Getty mansion for the reception.

Getty was especially concerned about her loved ones’ ability to attend her wedding in security after her father and grandma Ann died last year.

“When my beloved grandmother passed away, I knew I wanted to have the wedding in my house to honor her,” Getty told Vogue. “My grandmother interior designed each room of the house which allows me to feel as if she is there with me. I would be able to look around the room and see something that reminds me of her.”

The bride wore a custom veil that had walnuts to represent her grandmother, who “grew up on a walnut farm,” and guitars to honor her father.

Getty wrote on social media about her special day that she felt like her “grandma and father were by my side gagging with joy as much as I was.”

“It was so special and I could not be more grateful for those who made it happen,” she added.