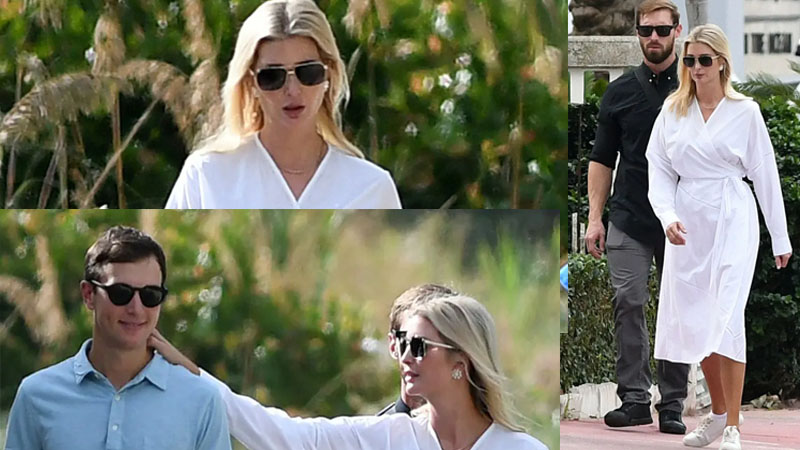 Ivanka Trump and her family were sighted in Miami last weekend. On Saturday, Oct. 23, the former first daughter, her husband, Jared Kushner, and their three children, Arabella, Joseph, and Theodore, attended a neighborhood synagogue. For the fall outing in Florida, Ivanka and her family dressed in white, blue, and earth tones.

During the stroll, former President Donald Trump’s daughter was seen wearing a long-sleeve white wrap dress with tennis shoes. Joseph, eight, and Theodore, five, were dressed identically in white button-down shirts and earth-tone slacks. Arabella, like her stylish mother, was dressed in a summery frock. The ten-year-old chose a shade of blues like her father, who was dressed in polo and khaki trousers.

As they walked, Ivanka was photographed sharing a tender moment with Jared, resting her hand on the back of his neck. The pair, who married in 2009, recently relocated their family to Florida. Since her relocation, the author of Women Who Work has been photographed surfing, visiting a water park, and taking an airboat ride in the Everglades.

In January, the Wall Street Journal reported that Ivanka and Jared had agreed to lease an apartment at the Arte, a posh seaside building in Miami’s Surfside neighborhood.

According to the WSJ, the deal was “thought to be an interim measure while the couple builds a house on a lot they recently purchased on Miami’s Indian Creek Island for $32 million.”

Then in July, it was reported that Ivanka and Jared bought a $24 million estate on Indian Creek Island. Ivanka has kept a low profile since leaving D.C., but she did share photos of herself receiving both doses of her COVID-19 vaccine in Miami.

“This afternoon, I gratefully received my second dose of the COVID-19 vaccine. Getting fully vaccinated is the best way to end this pandemic and protect ourselves and one another. ♥️,” she wrote alongside the picture from her second shot in May.