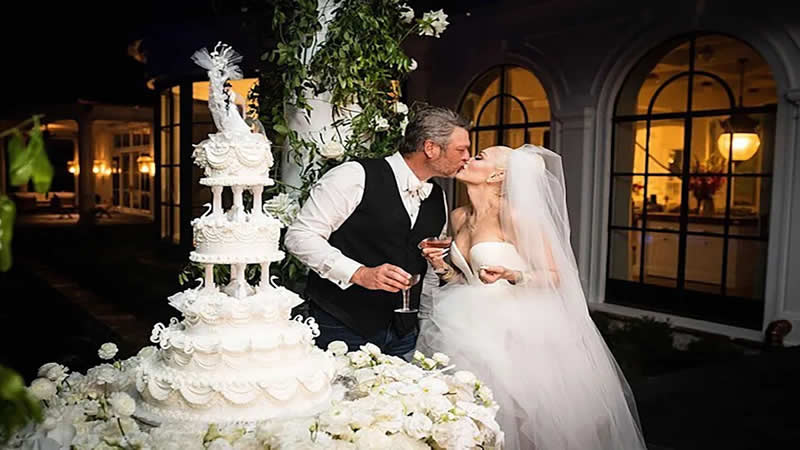 It was a picture perfect day for Gwen Stefani and Blake Shelton!

The superstar couple said their “I dos” on Saturday, in an intimate at-home wedding at Shelton’s ranch in Tishomingo, Oklahoma. And on Monday, Stefani posted a series of romantic photos from their nuptials to Instagram, writing, “dreams do come.”

“I love you Blake Shelton,” Stefani wrote in the caption, tagging her now husband in the post. He later reposted the gallery of pics.

Stefani’s photos showed various moments from her and Shelton’s wedding, including one moment in which Shelton drove Stefani off in a golf cart decorated with white tulle bows, as she held her bouquet of white roses in the air.

The pair also shared a smooch while standing in front of their 5-tier wedding cake — topped with a statue of a similar bride and groom dancing — and posed on a cliffside, overlooking luscious green trees and a pink sunset sky.

A fourth photo, posted to Stefani’s Instagram Stories, showed the couple embracing on the dance floor.

She kept her hair simple, pulling her long blonde locks back under her white chapel length veil, which featured the hand embroidered names of Stefani, Shelton, and their kids. For makeup, Stefani opted for dark eyeliner and a simple red lip. She accessorized her look with gold bangle bracelets, sparkling earrings, and a cross necklace.

Shelton, like the mullet he rocked during quarantine, kept his ensemble fitted and fun. Up top, the 45-year-old country singer wore a black tuxedo jacket over a white shirt, black vest, and light bow tie. But for pants, Shelton opted for some classic blue jeans.

Earlier in the day, Stefani confirmed that she and Shelton had tied the knot, posting a boomerang with the caption “July 3, 2021” — the date she and Shelton said their “I dos.”

In the cheeky video, Stefani revealed her smiling face from behind a white lace veil.

Stefani’s dress wasn’t in the shot. Instead, she wore a white silk robe with pink floral details.

That veil, in turns out, was part of Stefani’s reception look. According to Vera Wang, who released photos of the ensemble on Monday, Stefani changed into “a custom lily white Italian silk crepe and hand tumbled tulle strapless mini dress” for her party.

Stefani accessorized this look with a pair of sky-high custom stiletto cowboy boots from Le Silla, which featured Swarovski crystals with the monogram of their initials, also with crystals, on the sole

Stefani and Shelton — who have collaborated on hit songs like “Happy Anywhere,” “Nobody but You,” and “You Make Me Feel Like Christmas” together — fell in love nearly six years ago on set of The Voice. The two have been dating since 2015, and got engaged in October 2020.

Throughout the pandemic, Shelton and Stefani have been spending much of their life in Oklahoma with the rocker’s three sons, Kingston, 15, Zuma, 12, and Apollo, 7.

“We’ve been doing things that I wished I had time to do for the last 20 years,” Shelton said previously on the Today show. “Literally stupid things like pick blackberries … We grew a garden. I grew several acres of sweet corn. Country things like that!”

Several months before their engagement, Stefani told Extra that she thought it was “pretty cute” when people referred to Shelton as her husband. “Do you know how many people say my ‘husband’ about him?” she said. “I guess we’re just together.”

Leading up to the wedding, sources shared with PEOPLE that the two were ready to tie the knot. “They are both ready to get married,” a source told PEOPLE in December 2020. “They don’t want a huge wedding. They want their family and close friends to attend and that’s it.”

“They looked really happy together and definitely in love,” said the onlooker, who added that the group — which included Stefani’s sons — dined on burgers, fries, tacos and more.

It’s also been revealed that Carson Daly, host of The Voice, officiated Stefani and Shelton’s ceremony.