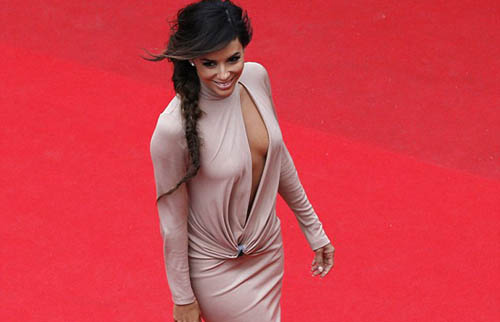 She has already made an impact with her outfit choices during her time in Cannes. But on Monday evening Eva Longoria upped her game as she attended the premiere of Foxcatcher at the 67th Cannes Film Festival.

The 39-year-old turned headed opting a for a nude dress – which while it had long sleeves and a high-neck, also had a cut-out section at the front which revealed some serious skin. The actress, who had gone bra-less for the occasion, looked more than happy to show off her petite figure and a dose of cleavage as she posed. And she didn’t look too worried about the windy conditions, no doubt confident she wasn’t going to suffer any serious wardrobe malfunctions.

Eva Longoria who is a  L’Oreal spokesperson had her hair styled in a fishtail plait, which fell sexily down her neck and she added plenty of eye make-up for a dramatic red carpet look. The star was there to support Steve Carell, Channing Tatum, and Mark Ruffalo, who star in the Bennett Miller film, which has already won rave reviews. The screenplay for the biographical drama film, was written by E. Max Frye and Dan Futterman, based on Olympic wrestling gold medalist Mark Schultz’s autobiography.

Earlier in the day the pint-sized star had been seen indulging in a spot of retail therapy in Cannes while wearing a fitted blue jumpsuit while flanked by a team of security guards. The plunging midnight blue jumpsuit accentuated the Desperate Housewives’ star’s petite figure – she added some height with a pair of black and nude Christian Louboutin court shoes. Eva Longoria accessorised her outfit with a black clutch bag and a pair of oversized sunglasses.

The star also indulged in a four-handed massage, with two masseuses working out her knots simultaneously, to prep her for the red carpet. Eva Longoria tweeted: ‘OMG just had a four-handed massage at the L. Raphael Spa at the Martinez! Wow! I’ll never want a normal massage again!’ It’s been a busy few nights for the globe-trotting screen star, who attended the red carpet screening of Saint Laurent, a film about the life of the legendary French couturier, on Saturday evening.

The previous night, she worked her magic in front of the banks pf photographers at the Global Gift Gala at the Carlton Cannes Hotel l. Wearing a stunning, skintight, pale pink backless dress with a mermaid finish – a look that was almost identical to Kim Kardashian‘s May 13 Instagram shot – the star didn’t disappoint the crowds of fans and paparazzi present.