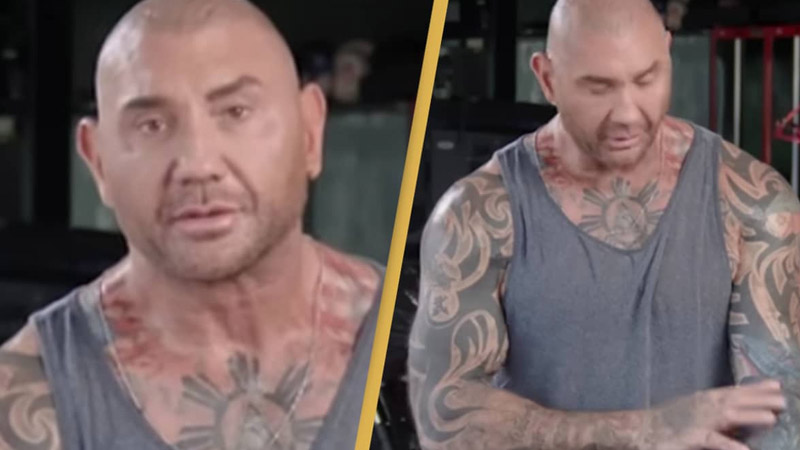 Dave Bautista is completely tattooed, from full-scale, multi-colored dragons to portraits of his pets to a little Winnie The Pooh cartoon. However, among the actor’s various tattoos are a few cover-ups following a falling out with particular people from his past.

Perhaps his most severe cover-up comes from a dispute with a friend who turned out to be an “extreme homophobe.” Dave Bautista has always been an outspoken supporter of the LGBTQ+ community, and his mother, Donna Raye, is a lesbian.

During a tattoo tour with GQ, the former WWE star said that he formerly got a tattoo of a team logo on his left inner arm, but had to cover it up when a member of the team issued some hurtful anti-gay statements, according to Nbcnews.

“I was a part of a team with a person I considered a friend and someone I really looked up to,” he shared. “And then he later came out publicly with some anti-gay statements. He turned out to be an extreme homophobe and so I had a huge issue with it, a personal issue – my mom’s a lesbian.

“And I just could no longer call him a friend so I had it covered up.” While Dave did not name names, the former MMA fighter did have a public spat with pro-boxer-turned-politician Manny Pacquiao in 2016.

Pacquiao told TV5 in the Philippines that gay people were “worse than animals.” “It’s common sense,” he said at the time. “Do you see animals mating with the same sex? Animals are better because they can distinguish males from females.

“If men mate with men and women mate with women they are worse than animals.” Not long after the controversial statement, Dave spoke out against Pacquiao, telling TMZ: “My mom happens to be a lesbian so I don’t f***ing take that s**t.

“I don’t think it’s funny. If anyone called my mother an animal, I’d stick my foot in his a**.” Dave stated at the time that he still admired Pacquiao ‘as a fighter,’ but his personal views made him respect him a lot less’.

Dave has also had to cover up tattoos of his ex-names, and partners despite his mother’s warnings. Pointing to some body art on his right shoulder, he said: “This is a cover-up, that was actually a girlfriend’s name.”

Showing off another tattoo on his left hand, he added: “This is an ex-wife’s name. My mom always said, ‘Don’t put a woman’s name on you.’ And I didn’t listen.”

Kevin McCarthy’s fake victory will have economic and political consequences