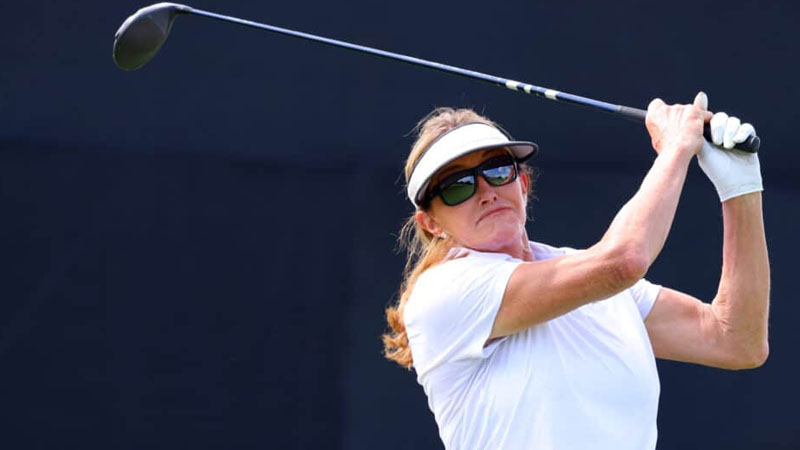 Jenner, 72, has long stressed how “unfair” it is for cis athletes to compete against trans women like swimmer Lia Thomas.

However, in an interview with Fox News on Wednesday (24 August), the former Olympic decathlete and golf fan stated that Hailey Davidson’s success is not due to her gender, as some of her predictable critics may believe.

Jenner said: “I’ve been very consistent with how I’ve tried to approach these transgender athletes. It really depends on the sport. Every sport is different.

“Obviously, we saw with Lia Thomas, she had gone through male puberty, bigger cardiovascular system, it just wasn’t fair. And fortunately, we won that one

“Golf is a totally different game. It is a game of touch of feel. It is about your ability around the green, to get the ball out of the bunker.”

“She’s playing within the rules,” Caitlyn Jenner added. “Golf is [a] totally different game. It is a game of touch and feels.”

Trans women have been welcomed by the LPGA since 2010 if they have undergone hormonal therapy and gender-affirming surgery, according to the LPGA’s gender policy.

This means that a trans woman could compete on the Epson Tour, the American Women Golfers Organization’s official qualifying tour.

Davidson, a Scottish-born professional golfer now residing in Florida, came close to doing so in early August before narrowly missing the cut during Stage I of the Epsom Tour Qualifying School.

Jenner also stated that she is unsure if Davidson has what it takes to make the LPGA. “The jury on this one is still out.”Let it play out,” said the former California gubernatorial replacement candidate.

Davidson’s mum, Sandra Davidson, defended her daughter. “You [Judy Murray] do not know my daughter Hailey and most importantly you know absolutely nothing about transgender men or women,” she told Scottish tabloid the Daily Record.

“To be honest with you, I’m on Hailey’s mum’s side,” Caitlyn Jenner said. “They don’t know what it is like to go through a transition, how difficult it is.

“The mothers do know and Hailey’s mom knows what this child has been through and is out there supporting her.”

Davidson thanked the LPGA on Wednesday for allowing her to compete. “I’m disappointed not to make it to stage two but am still hopeful about the future,” she wrote on Instagram.

“I understand the questions and dialogue surrounding transgender athletes. I honestly do. What I don’t understand, though, is the hatred that comes with it.

“Some people initiate these attacks willingly, while others maybe don’t understand how hurtful their words can be.”

She added: “While the world may see me as a transgender woman, I’m also a human being. No matter what your viewpoint may be on transgender athletes or transgender people in general, we are just like any other human in wanting to simply be accepted.

“The world is full of far too much hate at the moment. Although this hate may be loud, love and equality will always win in the end.”

Monkeypox Vaccine: ‘People are freaking out, seeing young men with lesions all over their faces

Robert Pattinson Reveals His Thoughts About Villains In Batman Sequel