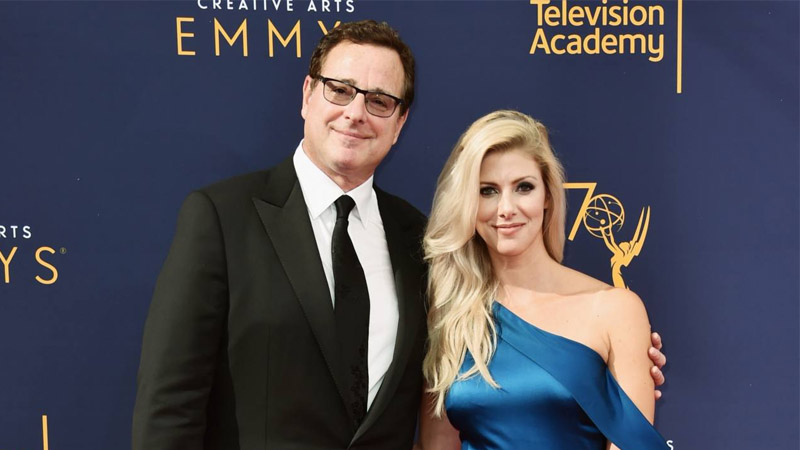 On Monday, the 65-year-old actor posted a musical montage to Instagram, featuring him and his wife, Kelly Rizzo, singing Harry Styles’ hit tune, “Watermelon Sugar,” which has been remixed with SEB’s song, “Seaside,” as a new TikTok trend.

In the video, the Fuller House star begins to sing the hit ballad while as the words “Thought I’d never get married again…then… ” appear over the clip. When the words disappear and Saget’s part comes to an end, Rizzo, 42, pops into the shot and cuddles up to the comedian.

Rizzo then sings the SEB lyrics, “Hi, baby do you wana be, mine?” from the popular TikTok mashup.

Rizzo also shared a similar version of the video on her own account but with the couple singing in reverse roles.

In the clip, also posted Monday, the Eat Travel Rock host sings the same “Watermelon Sugar” chorus before Saget jumps in front of the camera. Smoking a cigar with a flower behind his ear, the Full House alum sings the same SEB lyrics that his wife did the video on his profile as she leans in to give him a kiss on the cheek.

Smitten, Rizzo captioned the post, “Thanks for finding me, @bobsaget.”

The couple wed in October 2018 in Santa Monica, California with a beachfront ceremony. A source told PEOPLE at the time that the wedding event was a heartfelt celebration.

“It wasn’t an over-the-top celebrity wedding,” the source said. “Their reception turned into a huge dance party. Even the décor was pretty simple, flowers and black and white table settings. It was a big celebration.”

“So appreciative my family and friends were at Kelly’s and my wedding especially my family for life, my Full & Fuller House family, ” Saget captioned a group photo from the reception, tagging his friends and costars. “I love all these people so much.”

Since Saget and Rizzo said “I do,” they’ve posted a number of lighthearted photos and videos having fun together. Rizzo previously told her Instagram followers that her husband made her feel “like the luckiest girl in the world.”

Jon Hamm and Kim Kardashian in a tight spot