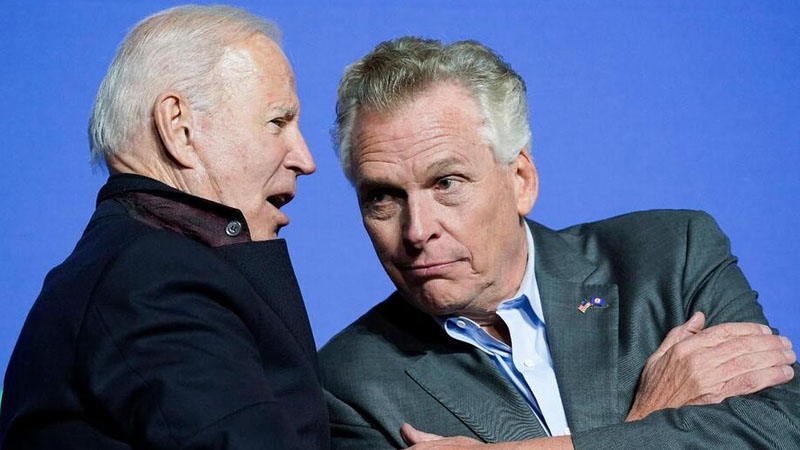 ARLINGTON, Va. (AP) — President Joe Biden is casting the contest for governor of Virginia as a rebuke to his predecessor, connecting the Republican nominee to former President Donald Trump.

As he campaigned for Democrat Terry McAuliffe in what has become a tight and increasingly acrimonious race, President Joe Biden framed the Virginia governor’s race as a rebuke of his predecessor, connecting the Republican candidate to former President Donald Trump.

In Virginia, no Republican has won statewide office since 2009, and Biden won by a comfortable margin of 10% in 2020. With the election just a week away, surveys show McAuliffe matched with Republican former business executive Glenn Youngkin, and the president’s own popularity is on the decline.

Both candidates are focusing on turning out their base supporters in the final days of the campaign, with Republicans focusing on culture war issues — prompting a debate over banning books in high school classrooms — and McAuliffe, who previously served as governor from 2014 to 2018, slamming Youngkin for his ties to Trump.

During a Tuesday night rally in Arlington, just over the Potomac River from Washington, Biden hammered home that point, referencing the former president by name more than Youngkin and drawing a straight line from last year’s presidential election to next Tuesday’s election.

“I ran against Donald Trump and Terry is running against an acolyte of Donald Trump,” Biden said.

He charged that Youngkin “not only embraces some of the essential lack of character, but he also endorses Donald Trump’s bad ideas and bad record.”

Meanwhile, McAuliffe told the same gathering that Youngkin “is ending his campaign the way he started it: With divisive dog whistles.”

“We have a choice: A path that promotes conspiracies, hate, division, or a path focused on lifting up every single Virginian,” McAuliffe said.

A loss by McAuliffe — or even a narrow victory — would be a bad indication for Democrats, who are already facing tough political challenges in next year’s midterm elections, when their tenuous control of the House and Senate would be on the line. The party that wins the White House loses congressional seats in the next year, and Virginia, this cycle’s top off-year race, is considered as a vital test of whether Democrats can maintain their momentum heading into 2022.

However, it is uncertain how much assistance Biden will provide to McAuliffe. Following the tumultuous U.S. exit from Afghanistan, and with an economy that is still recovering from the coronavirus outbreak, the president has seen his approval ratings fall.

Tuesday night, Biden defended his record, repeating some of his past disagreements with Trump. He said that, while Trump presided over the loss of American employment, the Biden administration had overseen a surge in job creation, and he also praised the stock market’s strength during his tenure, a nod to one of Trump’s preferred measures of success.

And Biden praised portions of his infrastructure and social-services investment initiatives, linking his goals to the need to win the elections next week.

“We’re on the right track, but we’ve got more to do,” Biden said.

Youngkin’s campaign released an ad portraying a mother who tried unsuccessfully to get the book “Beloved” removed from suburban Washington schools years ago. Toni Morrison’s famous 1987 novel is about a runaway slave who kills her young daughter instead of allowing her to be returned to the plantation.

The mother’s advocacy resulted in McAuliffe vetoing state bills in 2016 and 2017 that would have allowed parents to opt-out of having their children study sexually explicit content.

During his rally, McAuliffe’s campaign drew attention to the controversy by handing out copies of “Beloved” to reporters, and McAuliffe hammered Youngkin for it.

“He wants to bring his personal culture wars into our classrooms,” he said. “Folks, we will not allow Glenn Youngkin to bring his hate, his chaos, into our Virginia schools.”

As per Usnews, Youngkin has made defending “parental rights” in classrooms a priority of his gubernatorial candidacy, and his team countered by pointing out that the laws McAuliffe vetoed received bipartisan support. It said that by accusing Youngkin of racial politics, McAuliffe was implicitly accusing his own party of doing the same.

That problem erupted before Biden spoke to a crowd of over 1,000 people who shouted and shivered in the cold on soccer fields in a park in Arlington, which has long been considered solid blue territory. Other portions of the fast-growing Washington suburbs have helped turn Virginia from a swing state to a more solidly Democratic state, especially as the number of Black, Hispanic, and Asian inhabitants has grown.

A small number of demonstrators gathered nearby, one waving a giant “Trump Won” banner and chanting “Let’s Go, Brandon,” a euphemism for a profanity directed against Biden that has gained popularity on conservative social media platforms.

Ebonie Gadson, a 23-year-old independent voter who works for a tech firm and lives across the street, went to the rally to learn more about the governor’s race, which she said she had only lately been interested in.

“Having the president’s support, I think, will increase voter turnout and just get everyone excited,” said Gadson, who added that she wanted to learn more about the race “than just what I’d seen on TV.”

Republican National Committee Chairwoman Ronna McDaniel said Youngkin is “ensuring every Virginian has a say in their child’s education.”

“With an unprecedented amount of Republican enthusiasm, Virginians are ready to reject Terry McAuliffe and Joe Biden,” McDaniel said in a statement.

Biden visited Arlington for the second time since McAuliffe announced his gubernatorial campaign. He’s the latest in a long line of Democratic celebrities to visit the state in the hopes of energizing the party’s base.

On Friday, Vice President Kamala Harris will campaign for McAuliffe, her second campaign appearance in as many weeks. Last week in Dumfries, about 30 miles south of Washington, Harris described the race as “tight” and urged Democrats against complacency.

“This is no longer a campaign,” Youngkin said. “This is a movement.”

Youngkin campaigned in Clarksville and Danville on Tuesday as part of a 50-stop bus tour near the Virginia-North Carolina border. Youngkin, a former top executive at the private equity firm Carlyle Group, has mainly avoided outside support from national party members, while being endorsed by Trump, in contrast to McAuliffe.

“This is no longer a campaign,” Youngkin stated as he recently visited suburban Richmond. “This is a movement.”

Copyright 2021 The Associated Press. All rights reserved. This material may not be published, broadcast, rewritten, or redistributed.