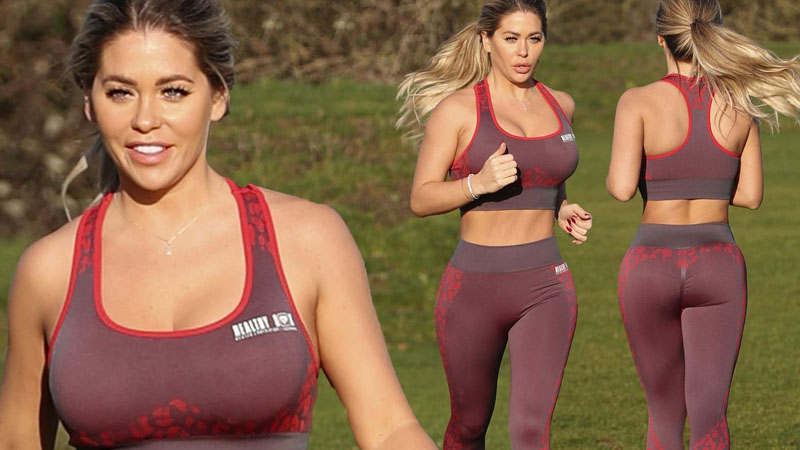 She has been dragged into a dispute between her boyfriend Kris Boyson and his ex, Katie Price. Yet Bianca Gascoigne brushed off the drama as she squeezed in a workout outdoors in Kent on Sunday.

The reality star, 33, looked radiant as she slipped into teal gym gear that accentuated her hourglass curves. The blonde bombshell teamed the garment withy tiny shorts that clung to her peachy derriere and highlighted her toned pins.

Bianca – who is the daughter of footballer Paul Gascoigne – seemed in great spirits as she worked up a sweat by skipping and frolicking on the grass. It comes as the timeline over Bianca’s relationship with Kris has been called into question by his ex-girlfriend, Katie. Katie reportedly confronted Kris at his house over reports that he denied being in contact with her to girlfriend Bianca.

According to The Sun, Kris told Bianca that he has had no contact with Katie since he started dating her, however Katie insists that is untrue.

The source said: ‘Katie had heard that he’d been telling people they’d had no contact since he started dating Bianca, and she’s saying it’s not true. ‘She thinks he should be honest with Bianca and tell her that they’re still speaking.’

However, those close to Kris insist that there has been no contact and plans to move on from their relationship with new girlfriend Bianca. They said: ‘He wants to move on with Bianca and he told Katie that.’

Jamie Foxx’s sister dies at 36: ‘My heart is shattered into a million pieces’