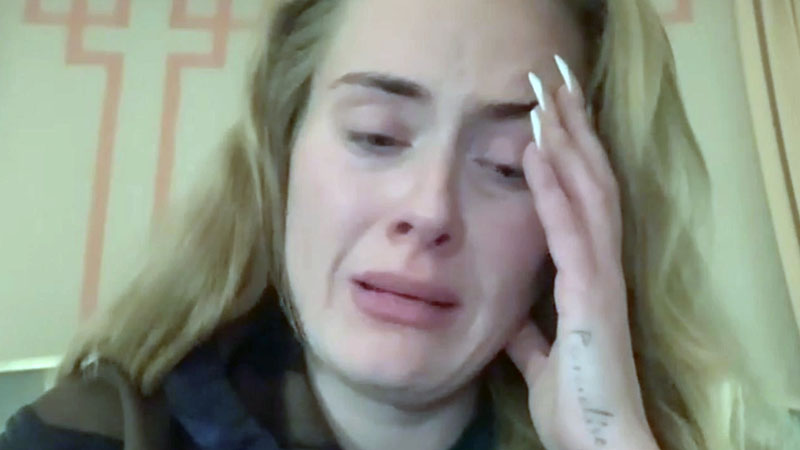 Adele broke down in tears as she made the announcement. Credit: Instagram/Adele

Singing superstar Adele broke down in tears as she told fans her highly-anticipated upcoming Las Vegas residency show was not ready to go ahead.

The songstress was visibly distraught as she shared the news with her 49 million Instagram followers.

She had been due to perform on January 21 at The Colosseum at Caesars Palace in Las Vegas, before the extremely last-minute announcement shocked fans.

“Hi, listen, I’m so sorry but my show ain’t ready. We’ve tried absolutely everything that we can to put it together in time and for it to be good enough for you but we’ve been absolutely destroyed by delivery delays and COVID,” the star falteringly began.

“Half my crew, half my team are down with COVID, they still are and it’s been impossible to finish the show.

“I can’t give you what I have right now and I’m gutted. I’m gutted and I’m sorry it’s so last minute,” she went on.

Adele said she had been awake “for over 30 hours” trying to figure out how to go ahead with the show but that her team had “run out of time”.

“I’m so upset and I’m really embarrassed and I’m so sorry to everyone who’s traveled again,” she said, breaking down as she continued.

“I’m so sorry, it’s been impossible. We’ve been up against so much and it just ain’t ready.

A caption alongside Adele’s video confirmed that all dates would be rescheduled with “more info coming soon”.

Adele was set to become one of the highest-paid female performers in the long history of Las Vegas residencies when she took to the stage for her first performance at the Caesar’s Palace Colosseum on Friday.

The concert series was meant to run until April 12 2022 with the star set to perform two shows every weekend.

Announcing the planned residency back in December, Adele appeared excited.

“See you at Caesars in Vegas ✨,” she wrote on Instagram and posted a residency poster and a photo of herself performing.

In less than 20 minutes, the post garnered nearly 500,000 likes from followers who seemed pretty thrilled.

The announcement came shortly after Adele sat down for an interview with Oprah Winfrey during which she opened up about her weight loss, divorce, childhood memories, and dating.

She also revealed that she was not afraid of what people might think about her new music.

“But nothing is as scary as what I’ve been through over the last two, three years behind closed doors.

“So I’m not frightened about what people may or might not know.”

Jennifer Lopez encouraged to speak out by her son