Andrew Castle has quit GMTV after a decade of presenting. ‘I have had a fantastic ten years fronting one of the UK’s most watched television programmes,’ he says.’

But with all the changes taking place at GMTV I felt it was time for a new chapter in my life as well. ‘I enjoyed meeting and working with some very talented people at the programme and I wish all those at GMTV every success in the future.

‘Andrew, 46, will return to ITV screens later in the year as presenter of 71 Degrees North. His move follows the departure of Ben Shephard and Penny Smith from the show. More changes will see Adrian Chiles present the programme five days a week. (Kate Lucey) 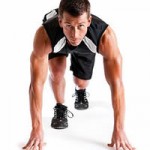 The Basic Fitness Tips to practice every day