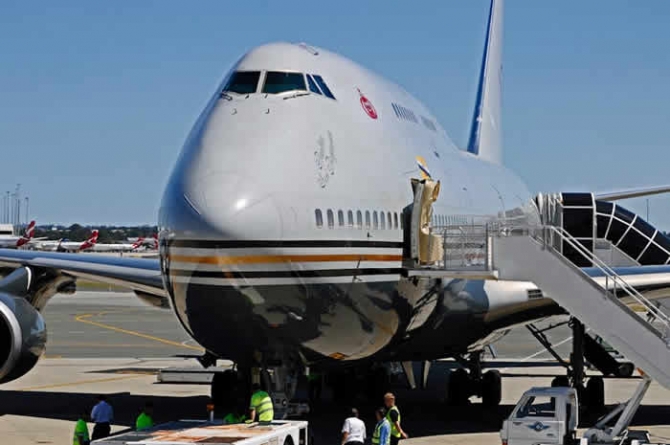 When air travel is in question, the rich and famous fly in their own private jets. Equipped with luxurious interiors to suit their delicate taste, these private planes such as Cessna, Boeing, or Convair, make the trips their wealthy owners more comfortable and enjoyable. So, next time you fly in economy class I bet youâ€™ll think about these lucky guys.

Originally operated by American Airlines, this 1968 vintage jet was reconfigured to hold 23, with pale leather armchairs, gold plated seatbelt buckles, oil paintings, and Waterford crystal lamps. The â€œTrumpâ€ logo on the side of the aircraft is 30 feet long, 4 feet high, and made of 23 carat gold leaf.

This 767 may look ordinary on the outside, but its interior is reportedly outfitted with chestnut and decorated with gold. The aircraft can often be spotted at Luton Airport some 40 miles north of London, where Abramovich spends much of his time.

The Sultan bought this 747 brand new for at least $100 million and had it fitted with a special interior and features such as washbasins of solid gold and Lalique crystal at an additional cost of some $120 million. The Sultan has several other aircraft, but this is his largest.

This former military Grumman HU-16 Albatross amphibian aircraft owned by singer-songwriter Jimmy Buffett is named â€œThe Hemisphere Dancerâ€. In 1996, it was shot at in Jamaica by local police who suspected it of carrying drugs.

The aircraft used to transport President George W. Bush on important state and domestic visits, Air Force One is a Boeing 747-200B that has been heavily modified with secure communications systems, electronic equipment, a self-contained baggage loader, front and aft air stairs, and the ability to refuel in-flight.

Billionaire Mark Cuban, who owns the Dallas Mavericks NBA basketball team, reportedly had custom-made seats installed on the aircraft that are large enough to accommodate the teamâ€™s tallest players.

Named â€œLisa Marieâ€ after Elvisâ€™ daughter, this Convair 880 was customized with 28 seats instead of the usual 110. The tail of the now preserved jet was painted with The Kingâ€™s personal â€œTCBâ€ logo, which stands for â€œTakinâ€™ Care of Businessâ€.

Owned by Challenger Administration LLC on Bill Gatesâ€™ behalf, this jet can carry eight people at a cruising altitude of 51,000 feet for a distance of 6,500 nautical miles, a range that permits nonstop Tokyo-New York or Los Angeles-Moscow.

One of the most rugged and reliable utility transport aircraft ever built, the unpressurized Twin Otter can carry up to 19 people and take off from and land on rough strips as short as 100 yards. This aircraft appeared in a seaplane chase scene in the James Bond film â€œCasino Royaleâ€.

1. Harrison Ford and his Cessna 525B CJ3 Citation Jet

Harrison Ford pilots his own CJ3, which can carry six people in comfort for some 1,900 nautical miles. Ford is considered so good a pilot that the FAA asked him to be the spokesman for the runway incursion awareness and prevention campaign that the agency started in 2001.