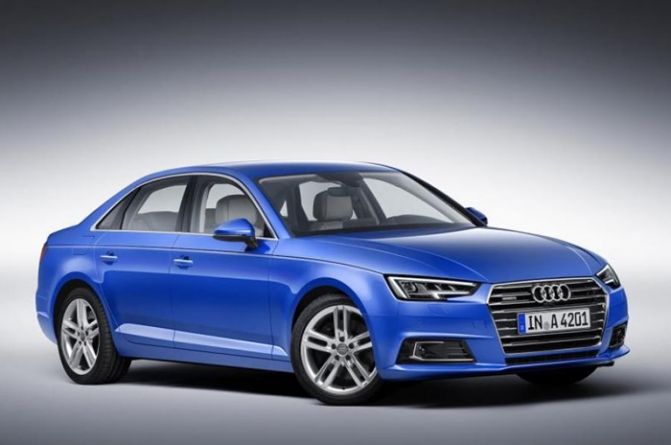 Key elements include a wider single-frame grille, newly shaped headlights with revised LED daytime running light graphics, a clamshell-style bonnet, larger wheelhouses, a flatter roof, a more prominent shoulder with a deep swage line running the length of the flanks, greater structure in the lower part of the doors. 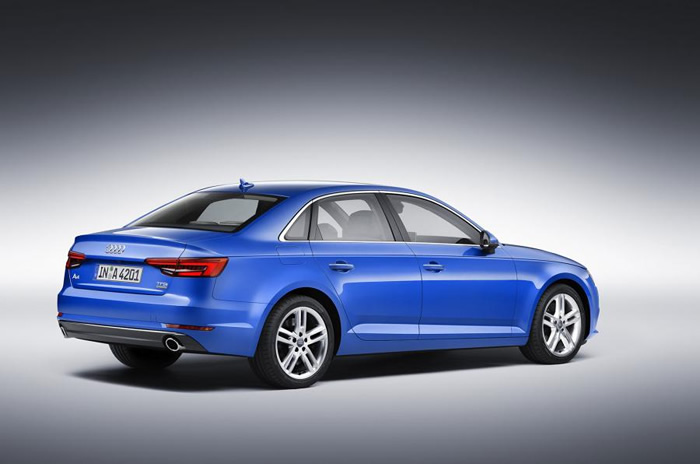 Sharp new tail-lights featuring a new take on Audi’s traditional LED graphics and, on the saloon, a higher boot lid. Although appearing a lot like a facelifted version of its predecessor, every body panel is described as new. Greater attention to aerodynamics, including the adoption of a largely flat undertray and detailed sculpturing around the rear end, has also netted the new Audi a class-leading drag co-efficient of 0.23 for the saloon. The new A4 has grown, but only slightly. With a length of 4726mm, width of 1842mm and height of 1427mm, it is 25mm longer, 16mm wider and the same height as its predecessor in saloon guise. This makes it 41mm longer, 32mm wider and 13mm lower than the latest Mercedes-Benz C-Class. The adoption of the latest evolution of Audi’s MLB platform has also seen its wheelbase increase by 12mm to 2820mm. Despite the bump in size, Audi claims the A4’s weight has been reduced by up to 120kg through the adoption of hot-formed high-strength steel within the body structure and aluminium for various body panels, including the roof. 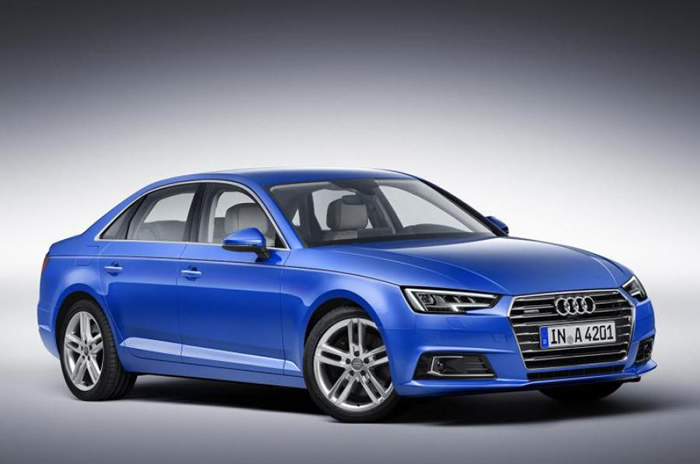 While its exterior styling leans heavily on that of its predecessor, the interior of the new A4 boasts a contemporary new design that provides it with greater space than ever before. Audi claims an additional 24mm of head room in combination with 11mm more shoulder room up front. The incremental stretch in the wheelbase has also provided the basis for a 23mm increase in rear seat legroom. Audi also promises added levels of comfort through the adoption of newly designed seats that are claimed to weigh 9kg less than those of the old model. Boot space is up by 15 litres in the new A4 Avant at 505 litres, increasing to 1510 litres when the standard 40/20/40 split rear seat is folded away. By comparison, the BMW 3 Series Touring boasts a nominal 495 litres, while the Mercedes-Benz C-class Estate offers 490 litres. Buyers can choose between a wide range of high-end options including a 12.3in digital instrument panel, an 8.3in monitor, inductive charging pad for mobile phones, sensor control opening of the luggage compartment, a Bang & Olufsen sound system, tablet-based rear seat entertainment and the latest version of the German car maker’s Multi Media Interface (MMI) system that features an LTE internet connection. 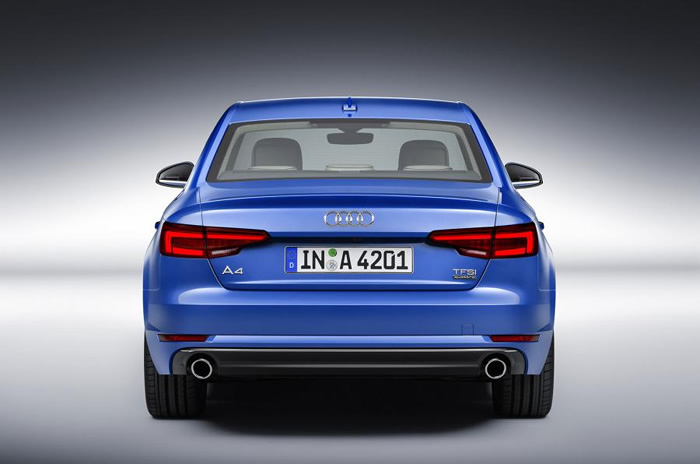 Among a list of standard safety items is Audi’s pre sense city system, which has been developed to prevent accidents at typical urban driving speeds. Using a windscreen stereo camera to monitor the road, it provides an acoustic warning and full preventative braking at speeds up to 25mph. The new A4 will be launched with a choice of three turbocharged four-cylinder petrol, two four-cylinder diesel and two V6 diesel engines, all featuring EU6 emission compliance. They are claimed to provide power increases of up to 25 per cent and economy gains of up to 21 per cent over the engines they succeed. A new 1.4-litre four-cylinder petrol unit delives 148bhp, or 30bhp more than the previous base 1.8-litre four-cylinder petrol engine it replaces. This is sufficient to provide the price-leading A4 1.4 TFSI saloon with 0-62mph acceleration of 8.9sec and a 131mph top speed together with combined consumption of 57.7mpg and CO2 emissions of 114g/km in combination with the optional S tronic dual-clutch automatic gearbox. 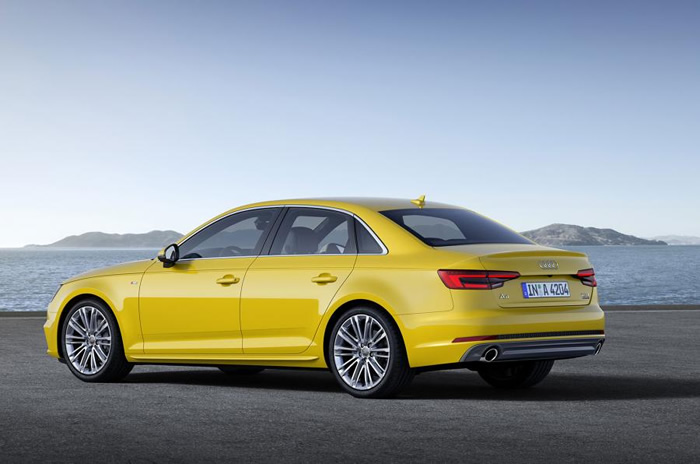 Further up the range is a reworked version of Audi’s 2.0-litre four-cylinder petrol engine. It comes in two differing states of tune, providing the new A4 2.0 TFSI with either 187bhp or 248bhp. Audi quotes a 0-62mph time of 7.3sec and a top speed of 149mph along with figures of 58.8mpg and 114g/km for the former, while the latter boasts a 0-62mph time of 5.8sec, a limited 155mph top speed, 49.6mpg and 129g/km, both in combination with the optional S tronic  gearbox.  Among the quartet of diesels available at launch will be Audi’s familiar 2.0-litre four-cylinder unit. Updated with a new AdBlue exhaust injection system as mandated by EU6 emission regulations, it initially comes in two states of tune, with either 148bhp or 187bhp in what has traditionally been the strongest selling model in the line-up, the A4 2.0 TDI. The former provides 0-62mph acceleration of 8.6sec and a 136mph top speed, together with combined consumption of 74.3mpg and CO2 emissions of 99g/km in combination with the optional S tronic gearbox. 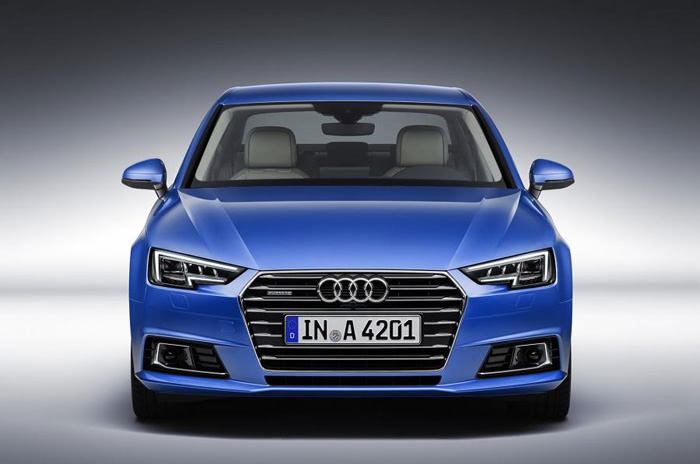