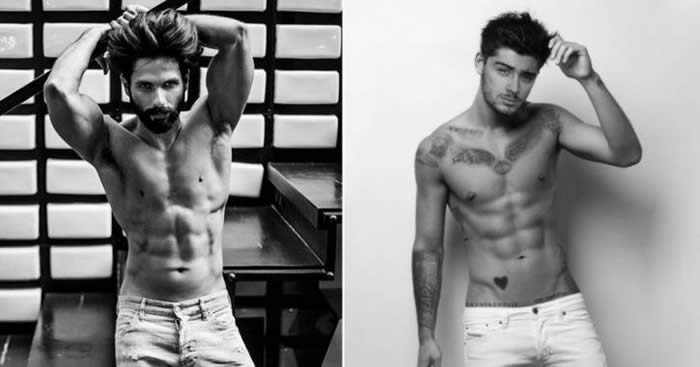 British singer Zayn Malik has lost his crown as the sexiest Asian man in the world to Indian actor Shahid Kapoor. The popular Bollywood star topped the 50 Sexiest Asian Men in the world list for the first time, dethroning chart-topping pop star Zayn who has been awarded the accolade for the previous two years. The stunning victory for Shahid in the 2017 edition of the globally renowned list published by UK based newspaper Eastern Eye rounds off an action-packed year, which saw him win a number of Best Actor awards for his stunning performance in 2016 film Udta Punjab. Bollywood heartthrob and previous winner Hrithik Roshan ranked second for the third year in a row with last year’s winner Zayn falling to number three.

Shahid Kapoor, who ranked seventh last year, expressed his surprise at topping the list and dedicated the stunning victory to his legion of fans who voted for him in force. “I would like to thank everyone who voted for me. I am humbled by the desirable tag. I believe sexy is not only to do with the physical, but as much to do with the mental perspective on life. This one is for all those fans who have loved and supported me” said Shahid Kapoor. The annual list, which is based on votes from fans around the world, heat generated on social networking sites and media attention, once again generated a massive global interest. Millions from around the world voted and helped the list trend on social media once again.

The highest placed TV star in the 14th edition of the long-running list is Vivian Dsena, who ranked fourth. Last year’s highest placed small screen star Ashish Sharma ranked fifth, whilst Multi-talented movie star Fawad Khan is the highest placed Pakistani for the second year in a row in sixth.Eastern Eye’s award-winning Entertainment editor Asjad Nazir, who founded the list and compiles it annually, thinks Shahid Kapoor is a worthy winner, citing his increasing profile as a role model as a key factor “The actor was destined to end the year as a king. It may not have happened with his hotly anticipated, postponed film Padmavati, where he plays a historical monarch, but has with him ruling the 2017 list of sexiest Asian men. Apart from showing off his impressive versatility as an actor and regularly delighting female fans with his chiselled physique, the handsome actor has won the hearts of fans with his devotion to his wife and young child. Being a devoted family man has not only made him even more appealing to women, but also a generation of young men who look up to him,” said Asjad.

The rest of the top 10 consists of Bollywood superstar Salman Khan (7), actor Gurmeet Choudhary, Bollywood star Ranveer Singh and the only sportsman in the list Virat Kohli (10). The highest newcomer in the 2017 edition of the list is young actor Mohsin Khan (17), who has been delighting fans on hit serial Yeh Rishta Kya Kehlata Hai. The youngest in the list is 20-year-old singer and musician Danyal Zafar (41), who enters the top 50 for the first time and is the younger brother of Pakistani superstar Ali Zafar. The oldest in the list is once again 52-year-old Shah Rukh Khan (20). The editorial choice for 2017 is British actor Riz Ahmed,“Award-winning actor Riz is helping to build cultural bridges with his impressive acting work on film and television along with his music and speaking up about important social issues. He is winning admirers, showing the biggest dreams can come true with hard work and connecting cultures,” said Asjad Nazir.

Last week Priyanka Chopra was named as the sexiest Asian woman for the fifth time, an achievement which has received massive global media attention since. The complete list is of 50 Sexiest Asian men is published in Eastern Eye newspaper on December 15, 2017.